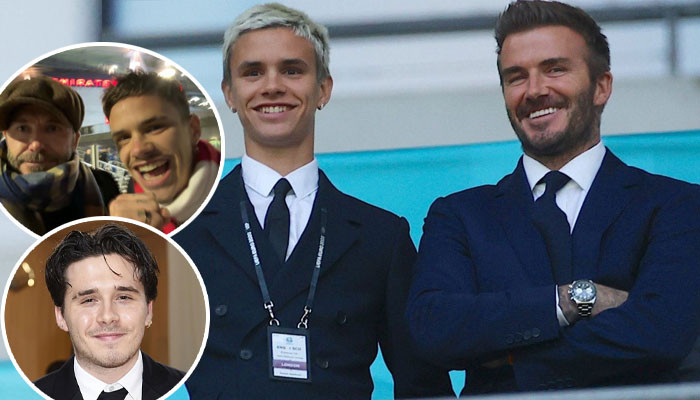 David Beckham and his son Romeo engaged in some friendly banter online over a football match.

Romeo supports Arsenal when his dad David was a Manchester United legend. The duo enjoyed watching the match live on Sunday, January 22, 2023, in the expensive seats at the Emirates, according to The Sun.

The match was a close call as the senior Beckham was rejoicing on his team’s win, but at the last minute the match took a turn. Romeo celebrated the win of his favoured team.

Once outside the stadium, Brentford B starlet took a selfie with his pouting father, gloating over his team’s win. The 20-year-old captioned the image as, “Sleep tight dad [kiss emoji] @davidbeckham [red dot and white dot]”

Not long after, David commented under the post with “Whatever” along with an angry swearing face.

Not able to stay out of the fun, David’s oldest son, Brooklyn Beckham, also joined in the fun as he posted, “Haha [two heart emojis]”

The Beckhams had been embroiled in some messy family drama ever since Brooklyn wed actress, Nicola Peltz. Victoria Beckham and The Last Airbender actress were not on good terms following an hiccup with Peltz’s wedding dress which Victoria was going to design but that never happened.

Brooklyn and Nicola spent the holidays away from the Beckhams as they celebrated Christmas at the Peltzs and rang in the New Year with friends in Mexico. Previous post What to watch on Monday: ‘The Bachelor’ returns to ABC

Next post Analysis | Alec Baldwin’s ‘Rust’ comments may have hurt him, some experts say